Week 9 College Football Picks: How The Hell Is Will Muschamp 6-0 Against The Vols? 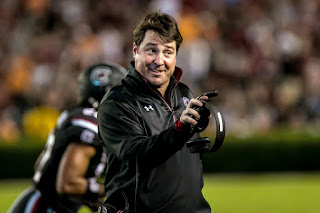 I can't believe it's Week 9 of the college football season already. It seems like just yesterday that I wrote a 4000+ word manifesto about the 2018 season in which I picked Michigan State to make the playoff. Yikes!
Onto the games!
Tennessee at South Carolina
Will Muschamp and his beer gut have somehow never lost to the Vols as a head coach, going 6-0 against them during his tenures at Florida and South Carolina. This is made more incredible by the fact that he’s only a mediocre 40-35 against every other opponent. Not breaking any news here, and I’ve said this before, but if Muschamp weren’t a head football coach, he’d be out of shape strength coach who downs entire cases of tall boy Natty Lights seven nights a week. As a head football coach, he pops in his second year with a school and tricks everyone into thinking he’s going to be great, until the program goes in the toilet Year 3, which leads to an awful Year 4, which then finds him unemployed. That was exactly the way his tenure played out at Florida, and he’s torpedoing in that direction again at South Carolina. The Gamecocks are 3-3 this season, and their signature win is… at home against a 4-3 Missouri team that’s offense disintegrated in a torrential downpour in the second half? If it doesn’t start pouring harder than it did during Noah’s Ark, Muschamp is 2-4 halfway through his third year with one conference wins, losses against all three ranked teams he’s faced, and a beer gut that isn’t getting any smaller. 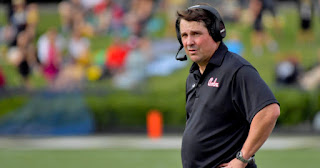