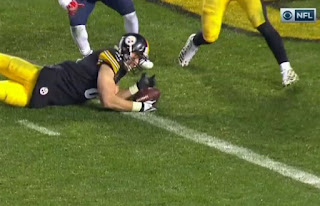 In what was shaping up to be one of the best NFL games of the year, the refs, in what has become a common theme this season, crapped themselves at the worst possible moment. The application of the asinine catch rules at the end of the Steelers-Patriots game potentially just swayed the home field advantage throughout the AFC playoffs.
In no way am I a Pittsburgh fan, but what kind of a crap ass call was that? On first and goal with 34 seconds left in the game, and with the Steelers trailing 27-24, Ben Roethlisberger made a nice throw to his tight end Jesse James, who received the ball, possessed it with two hands, and had both feet and his knee make contact with the ground. As he was falling to the ground, he stretched the ball out and broke the plane. Why the hell isn’t the play over at that point? Because of the worst, dumbest, contrary-to-everything-we’ve-ever-been-told-and-watched-growing-up rules about what a catch is. As James made contact with the ground, the ball was jarred loose slightly, causing him to lose control of the ball for a fraction of a second. After initially being called a touchdown on the field, the officials went to the replay booth and overturned the call, instead ruling it an incompletion. Why? Because apparently, for it to be a reception in the NFL, you have to possess the football, tuck it away, take 47 steps, do five barrel rolls on the ground, take the ball home, make love to it, and then let it meet your mother and father.

Sure, Pittsburgh made their share of mistakes. They let New England score 11 straight points in a 3 minute span, and they had no answer for Rob Gronkowski all day. And Big Ben made one of the worst throws of the season on their last offensive play when he tried to force the ball into triple coverage, which led to the game-ending interception. But at the end of the game, they made the plays to win the game. Ju Ju Smith-Schuster’s 69 yard catch and run got them inside the ten, and then they followed it up by having James CATCH THE BALL AND BREAK THE PLANE WITH IT.
We’ve seen this dumb rule time and time and time and time again cost teams games late. Remember the Calvin Johnson “catch” that got waved off at the end of a regular season game a few years ago? Or the Dez Bryant “catch” that was overturned? You know, the one that cost the Cowboys a playoff game? How were neither of these catches? We have eyes, we can see what’s possession and what isn’t. Why add the extra “complete the process of the catch” language? It’s completely unnecessary.

And here’s the other thing; why was this Geronimo Allison reception from today, where he took two steps and had the ball knocked out, ruled a catch, but James’s wasn’t? In one instance, a player caused the ball to be jarred loose, while in James’s case, the ground did. So it’s ok for a person to knock the ball out after two steps, but not the ground? How does that make any sense?

And how about this; if I’m a runner, the play is over if I cross into the end zone with the ball. But if someone swiped the pigskin out half a second after I broke the plane, they wouldn’t call it a fumble. So why doesn’t the same thing apply to receivers? Why isn’t it a touchdown if I cross the plane with two feet down and possession of the football? Why do I need to survive the ground? Again, how does that make any sense?


The NFL has a lot of issues right now; anthem protests, terrible officiating, an inept commissioner, declining ratings, and a salary cap structure that incentivizes teams to dump average veteran players in favor of younger, cheaper guys, which has helped to significantly drop the level of play on the field the last decade. With all of this going on, the league really can’t also afford to be challenging our intelligence as well at the same time.
So here’s a simple rule change: to make a catch, all you need to do is possess the football and have either both feet or one knee or an equivalent body part down in bounds. That’s it. It’s really not that difficult.
Posted by Matt Peace at 5:20 PM No comments: 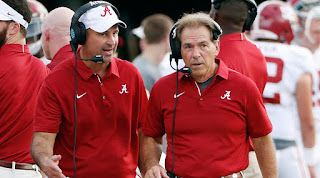 After three and half weeks of wild speculation, fan base rejection, outrage, confusion, and media hyperbole, the zaniest coaching search in the history of coaching searches is finally over, as Tennessee has officially hired Alabama defensive coordinator Jeremy Pruitt.
On the one hand, I suppose we should judge all of these hires compared to Greg Schiano, the bag of crap the Vols originally tried to sell us. So if that's the standard, then Pruitt is unquestionably the better hire. Both he and Schiano are defensive-minded coaches, but Pruitt is 8 years younger, is perennially one of the best assistants in college football, is considered a phenomenal recruiter, and has spent the last decade in either the SEC or at Florida State.
But hiring Pruitt is also a roll of the dice, so much so that he wasn’t even on my radar when this whole thing started, and you would've been hard-pressed to find him near the top of anyone else's either. Even still, there are some positive things surrounding him that I like. Everyone that's worked with him has nothing but praise for the job he does, and the perception among coaches is that he’s ready for an opportunity like the one at Tennessee. Plus, when Nick Saban needed to hire a DC before the 2016 season, he hand-picked Pruitt. That has to mean something right?
Then again, he’s also never been a head coach before, and with that brings a whole lot of questions and uncertainty. Are we sure he’s got the skill set to be wildly successful as the top man? Sure, he could be like Georgia’s Kirby Smart, also a former Saban DC who had never been a head coach before, who got the Bulldogs to the playoff in Year 2. Or he could go up in flames like a zillion other coordinators who took over at big time jobs when they either weren’t ready or didn’t have the natural coaching ability to run a successful program. Pruitt doesn’t have the track record of other guys they were interested in that turned them down, like Mike Leach, Kevin Sumlin, Mike Gundy, or Jeff Brohm.
By the end of Year 2, I think we'll have a pretty good grasp on what kind of a hire he ends up being. Why? Because since the SEC added a championship game in 1992, every coach that captured the conference title won at least 9 games by their second season. I think a 25 year sample size is more than enough of one to make an assertion like that.
And since I believe this, I'm going to try and not make any sweeping judgments about Pruitt until after the 2019 season. Next year very well might be another tough campaign, as the Vols have a brutal six week stretch that goes like this: Florida, at Georgia, bye week, at Auburn, Alabama, and at South Carolina. Sheesh. No breaks from the schedule makers there. There’s a possibility they, with a still shaky QB and a new offensive system, lose all five of those games.
Is Pruitt going to try and bring Alabama’s physical, pro-style attack to Knoxville? If so, that’s something I could get behind. The Tide have spent the last decade winning the line of scrimmage and bowling over everyone with their powerful running game. But the thing I don’t think Saban has gotten enough credit for over the years is his willingness to take shots down the field. Throughout the game, he’ll slowly and methodically pound the ball on the ground, as he bides his time waiting for the safeties to creep towards the line of scrimmage. And when he gets a matchup one-on-one on the outside, he’ll bomb it down the field to one of his athletes and let them make a play.
The Tide are a machine though, and the consistency in that attack has been built up over the last decade. Plus, I’m not 100% sure the Vols have the right quarterback on their roster. I respect the hell out of Jarrett Guarantano for the beating he took this season behind an offensive line that was in tatters, but he didn’t exactly do anything that made me think, “Wow, this guy really has a chance to be special”. Is it possible he was betrayed by Tennessee’s offensive staff, a group that was potentially the worst in the Power 5? I suppose that's conceivable. But I wouldn’t be my life on Guarantano being the guy.
Everyone in the media seems to think Pruitt will be able to put together an incredible staff. I hope their right. Whoever Pruitt decides to hire as his offensive coordinator will be the most important decision of his first year on the job. There’s been some buzz surrounding former Ole Miss head coach Hugh Freeze, which would be a nice snag if the Vols could land him. Yes, I know he’s got the “I called hookers from my university cell phone” and "NCAA trouble" baggage, but I’m not asking him to be the leader of my program, I just need him to call awesome plays and help develop the quarterbacks. And if he doesn't have any sanctions from his time at Ole Miss following him, then I don't see why the Tennessee wouldn't want him. But if the Vols can’t get him, we know, at least according to reports, that Tee Martin won’t be coming to join Pruitt’s staff either. I love Tee, and he helped bring a national championship to Rocky Top, but if you believe the local media in Los Angeles, Martin is, while serviceable, not viewed as an elite OC.
One more thing: Pruitt is going to continue coaching Alabama until their season is over while also attempting to get everything ready for his first season in Knoxville. I’d be more concerned, except Kirby Smart did the same thing two years ago with the Tide, and it seems to have worked out at Georgia so far.


Despite all my reservations, it’s going to be nice to see someone standing on the podium in front of everyone gladly accepting this coaching position. I want Pruitt to be wildly successful. I’ll be rooting like hell for him. And I think there’s a very good chance he’ll do a great job in Knoxville. At least I hope he does, because my heart can’t go through another decade-long stretch like it just did.
Posted by Matt Peace at 8:47 AM No comments: