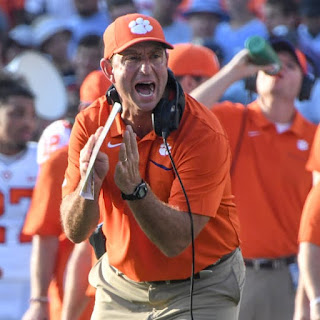 Posted by Matt Peace at 8:38 AM No comments:

Tennessee Vs The Bye Week; Plus, Week 5 College Football Picks 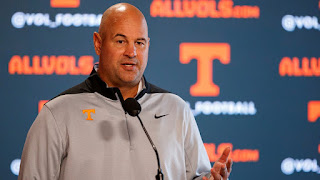 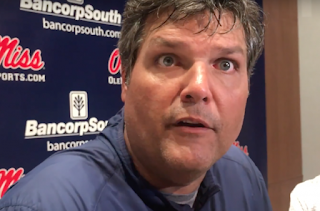 Prediction: Alabama
Kentucky at South Carolina
No one outside of Clay Helton needs a win more this weekend than South Carolina’s Will Muschamp, who wants to avoid dropping to 1-4 in what is a very pivotal fourth year for his job security going forward. Unfortunately for him, his team is bad. The Gamecocks have given up 81 points combined to Alabama and Missouri the last two weeks, and have only scored 37 themselves. I don’t have to love Mark Stoops or Sawyer Smith or the Wildcats as a whole to think they can go to South Carolina and win (And I don’t, by the way. Mark Stoops looks like a guy who would curse out the umpires at a little league game while wearing a sleeveless tee shirt).
Prediction: Kentucky
Mississippi State at #7 Auburn
The Tigers might finish the year as the best 3 loss team in the country. Incredibly, they’ve still got Alabama, LSU, and Georgia all left on the schedule, plus Florida on the road, which isn’t impossible but definitely not easily winnable. I don’t think they’ll have any problems with Mississippi State this week, but I wonder how Auburn people are going to be feeling at the end of the year when they’ve still got north of $20 million committed to Gus Malzahn, a guy who will have one season with less than three losses in seven years.
Prediction: Auburn
#5 Ohio State at Nebraska
This is the biggest game for the Cornhuskers in a long time. College Gameday will be there. It’s the ABC Saturday Night Game. The eyes of the nation will be upon them (or maybe they’ll be on Scott Frost, the new most handsome man in college football).
Ohio State has won all four of its games so far by at least 24 points, and they scored 76 unanswered last week against Miami of Ohio. Joel Klatt thinks they’re the best team in the country, and they’ll certainly have a great shot to prove that this week because I think they’re going to slaughter the Cornhuskers.
Scott Frost very well may end up winning big at Nebraska, but it won’t start tomorrow. In fact, the only real question is if the Huskers can keep the Buckeyes from covering. They’re 17 point favorites. I don’t give out gambling advice here normally, but if I were you, I’d bet the mortgage on the Buckeyes.
Prediction: Ohio State
Enjoy football this weekend! You deserve it.

Posted by Matt Peace at 9:00 AM No comments:

The Week In Football: Vols Drown In The Swamp, Harbaugh Drops The Ball, And Georgia Hangs On 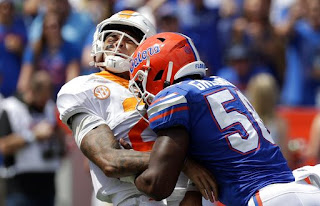 The ‘Dawgs should be 7-0 when they go to Jacksonville on November 2 to play Florida. Win that and they’ll finish up by hosting Missouri, traveling to Auburn, hosting Texas A&M, and going to Georgia Tech. Kirby is 0-3 on the road against SEC West teams in his tenure with Georgia, so that Auburn game is one to keep an eye on, though they’ll probably be favored every week until they play Alabama (or maybe LSU) in the SEC Championship Game.
As for Notre Dame, the Irish have a good chance to run the table the rest of the way, but it’s going to be difficult for them to make the playoff case, unless there is just a ton of chaos, meaning they’re going to need to be one of the only one loss teams in the country with maybe one or two undefeated teams. It’ll be particularly difficult for them if Georgia finishes the year with their only loss being to Alabama in the SEC Championship Game, because how could a one loss Irish team get in the playoff over a one loss Georgia team who beat them head to head? Or let’s say that Georgia wins the SEC; what’s the case for Notre Dame getting in over Alabama? Seems like a tough one to make.
Auburn Beat Texas A&M In College Station
The Tigers did this despite only gaining 299 yards of offense (compared to 391 for the Aggies) and dealing with swirling coaching rumors all week that Bob Stoops was going to take over for Gus Malzahn after the season.
Auburn has shown a ton of grit so far this season. They should’ve lost to Oregon in Week 1, and they didn’t succumb to the heat in a loud road environment this week. I don’t know what this means for them going forward, but if Bo Nix continues to play well, it’ll make Gus’s ridiculous contract not look like quite the dumpster fire that it actually is.
As for the Aggies, the schedule is only going to get tougher from here, and they already have two losses. They host Alabama on October 12, and finish the year with back-to-back games at Georgia and at LSU. Brutal. They won’t be favored in any of those games, and 7-5 feels probable for Jimbo Fisher’s second year.
If they do finish 7-5, that’ll bring Jimbo’s two year record to 16-9. If he did that at Tennessee, they’d throw a damn parade for him and probably name a street after him. But at A&M, where he’s making $7.5 million, I don’t think a lot of folks are going to be thrilled. I’m not saying he’s on the hot seat, just that he wouldn’t have lived up to the expectations that come when you sign a ten year deal so far.
Michigan… What Else Is There To Say?
The Wolverines had an extra week to prepare for Wisconsin and were down 28-0 at halftime. Listen, I get it, the Badgers are a good team, and maybe are even a darkhorse playoff contender. They’ve got the best defense in the Big Ten, and have one of the Heisman frontrunners in Jonathan Taylor.
With that said… holy crap Jim Harbaugh, you can’t have a performance like that in your fifth year, particularly not when you haven’t won your division, conference, or beaten Ohio State yet. This was a big game for ole Harbaugh and they crapped the bed.
Good luck against Ohio State this year too. This was the time for Harbaugh to beat them, in Ryan Day’s first season, when they had only four returning starters. Instead, the Buckeyes haven’t missed a beat while Michigan is arguably worse off now than they were in 2015 when Harbaugh got the job.
I don’t know what the Wolverines do going forward. Can they fire him? Do they want to pay him a buyout of over $15 million? And who would they hire to replace him?
I just can’t believe it hasn’t worked there for him yet. He resurrected and built what was a dead Stanford program, and he showed up in the NFL and had the Niners in the NFC Championship Game in 2011 and 2013 and the Super Bowl in 2012. But since he arrived in Ann Arbor, it’s been a disappointing mess.
There are no good answers for the Wolverines.
Washington State Blew A 32 Point Third Quarter Lead To UCLA
Crappy UCLA put up 50 second half points and forced six turnovers to comeback against kooky Mike Leach and Washington State. Hilariously, this happened only a few hours after I was arguing that Mike Leach would’ve been a better hire for Tennessee than Jeremy Pruitt was. How much of an idiot am I? Don’t answer that.
Chip Kelly needed a win probably as much, if not more than Pruitt did, and he was actually able to pull it off with an offense that finally looked like the kind he used to terrify the country with at Oregon. Can the Bruins build off this going forward and turn around what has been a disastrous first 16 games for Kelly? We’ll see.
As for Leach, Saturday, and frankly, this whole week, is why the best two jobs he’s gotten have been Texas Tech and Washington State. Do I think he’s a better coach than Jeremy Pruitt? Yes. Would I rather have him at Tennessee? Yeah, I would. But he’s never really been a defense guy, and while he’s a hilarious, how well would it play at Tennessee if they lost the same week someone asked him at a press conference about what SEC mascot would win in a fight to the death? Leach was really asked that about the Pac 12 mascots earlier in the week, and he answered the question about as thoughtfully as I would’ve hoped for him to do, because he’s Mike Leach and that’s what he does. He’s a crazy funny guy, and I’m happy he’s in college football. But realistically, he’s not ever getting the Tennessee job, particularly not with Mr. Serious Phillip Fulmer calling the shots.

My Top 4
1.      Clemson
I’ll leave the Tigers here for now, even though they haven’t been tested and won’t be until the playoff semifinals in late December. The ACC is atrocious. The second best team in the league, Virginia, only beat crappy Florida State and Willie Taggart by a touchdown at home last week, and followed that up by struggling for three quarters with Old Dominion. Not good.
2.      LSU
I’ll slot the Tigers here for now, though like I’ve said before, they aren’t beating Alabama. But their win at Texas two weeks ago is still probably the best of any team at this point in the season.
3.      Alabama
I think this is worst Alabama team Saban has had since the three loss one in 2010. If there were ever a year for LSU and Swamp Monster Orgeron to get them, it would be this season.
4.      Oklahoma
I’m putting the Sooners here because I think they’re going to finish the season with the best offense in the country for the third straight year. Georgia didn’t blow me away on Saturday; if anything, I feel less confident in them.
Posted by Matt Peace at 9:51 AM No comments: 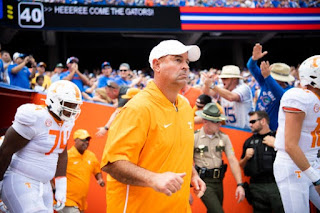 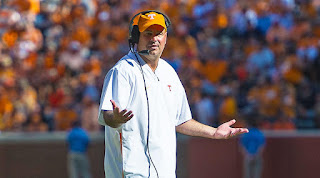 Posted by Matt Peace at 9:56 AM No comments: