Atlanta Just Pulled Off The Worst Football Loss Of All Time 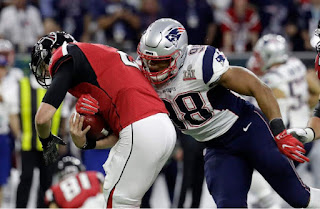 If you’re a Falcons’ fan, I have no idea how your heart is still beating right now. What an absolute gut wrencher. Considering the circumstances, this has to be the worse football loss of all time, right? Think about it:
1.      The blown 28-3 lead.
2.      The dropped pick immediately that led to that ridiculous Julian Edelman catch.
3.      Only getting 21 points from your record-breaking offense.
4.      Recovering a surprise onside kick in the third quarter, which gave them excellent field position, only to go three and out and have to punt the ball back to New England.
5.      Getting a pick six AND a forced fumble in the first half, coupled with god-knows-how-many drops, all while still finding a way to lose.
6.      The back-breaking Matt Ryan fumble that led to a touchdown.
7.      Getting the best performance of the season from your 28th ranked defense, a unit that eventually broke down due to the fact that the Patriots ran 93 plays, compared to just 46 for Atlanta.
8.      The sack/holding penalty combo that erased an incredible Julio Jones catch AND took them out of game-clinching field goal range.
9.      Giving up a 91 yard drive to New England that tied it at 28.
10.  Losing the coin toss in overtime. We all knew it was over at that point.
11.  Vic Beasley teasing everyone that he might make a game-saving interception in overtime, only to drop it.
12.  The fact that your franchise, in 51 years, has never won a championship.
13.  The fact that your city has captured just one professional sports title in its entire existence. No city outside of Cleveland has less sports' self esteem than Atlanta.
Just absolutely devastating, and even though I'm not a Falcons' fan, I felt the full brunt of everything because my brother, a life-long Atlanta diehard, sat in the same room with me for the entire four hours. I saw as his mood change as the night went on, from joyful and upbeat around 7:00, to exasperated in the fourth quarter, to desperate as Tom Brady drove the Patriots down the field , to pissed off as it went to overtime, to finally, absolutely emotionally and physically defeated as James White plunged into the end zone. It's just unbelievable. We all thought it was over. It was 28-3. There was no way New England could come back, right? Right? But then Brady kept fighting, the Pats’ defense dug in, Matt Ryan melted, and all of the sudden, Robert Kraft was lifting his 5th Lombardi Trophy.
Which reiterates this point: most of the time, when you watch sports, your teams are going to let you down. They’re going to tease you, suck you in, make you believe, and then tear the rug out from under you. They’ll break your heart.
But not like this. Not when you’ve never won a championship. Not when you have a 25 point lead.
There’s nothing to be said, nothing that can heal the sting. Sure, it’s just sports, but the pain of this loss will never go away. Hell, I've got a bank vault full of terrible Tennessee football and basketball losses that I'll never get over. Same with Braves' ones. But none as bad as this.
And the worst thing is, there's no guarantee that you'll ever be back in this situation. You might not ever be in the Super Bowl again. This might be your last shot for decades, or maybe even your entire life.
I’m sorry Falcons’ fans, and I’m really sorry for my brother Nick. Tough game.

Posted by Matt Peace at 8:52 PM No comments: