LeBron's The GOAT? Have We Forgotten About Michael Jordan? 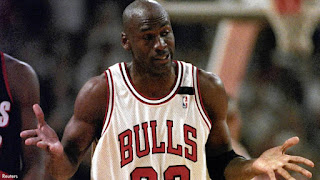 Jordan drops 55 on the Bullets in Game 2 of their 1997 First Round Series.

Jordan's final game as a Bull. He goes for 45 points, and hits the title winning shot with a push off on Bryon Russell.