The Playoff Committee Did The Right Thing By Picking Oklahoma 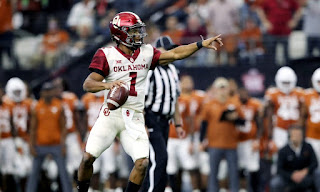 I’m not going to come on here and boo hoo for the Georgia Bulldogs because they didn’t make it into the college football playoff. With their 20 point loss to LSU back in October, they put themselves in a position where they had to beat Alabama yesterday if they wanted to be included in the playoff. And those chances evaporated the second they ran that asinine fake punt at midfield late in the 4th quarter on a fourth and 11. Good god.
We can sit here and whine all day about how we think Georgia is better, but the truth is that in their two biggest games of the year, they lost by 20 on the road against LSU and blew a 14 point second half lead against Alabama. Meanwhile, Oklahoma won their conference, avenged their only loss of the season, a three point defeat to the second place team in the Big 12, Texas, and have the probable Heisman Trophy winner at quarterback (Kyler Murray) leading one of the best offenses in the history of college football. At some point it doesn’t matter what we think a team is capable of, but rather what the results are against the schedule they've played. If Georgia’s best argument is, “We controlled the game against Alabama even though we lost”, then I’m sorry but that’s not a convincing enough case to overcome everything Oklahoma has done this season. Because all that really matters (and should matter) when we're talking about teams with similar strengths of schedules is wins and losses. If it doesn’t, then we might as well not even bother playing the season.
And let's not pretend that Oklahoma didn't have any good wins either. At a West Virginia team with an NFL quarterback is a better win than anything Georgia put up the entire year. Beating Texas on a neutral field is at least as good as beating Florida on a neutral field, right?
And when the Vegas odds are a field goal or less, that’s not a good enough reason to put a team in over another either. So I don’t care about the fact that Georgia would be favored over Oklahoma by a field goal. We’re not talking about an Alabama situation where you could argue they should be in if they lost yesterday because they’d be favored by ten or more over everyone.
Kyler Murray is going to give Alabama’s defense fits, and I think Notre Dame is going to be a tough game for a Clemson squad that hasn’t played a very good team since… last season. This feels like the right four based on the qualifications of “best” and “deserving”. Plus, with as much as Georgia struggled to stop Jalen Hurts when he came into the game, how do you think they’d deal with Kyler Murray, who is a superior athlete with a better arm? I think actually think OU would beat Georgia based on that.
Regardless, Georgia didn’t do enough. OU beat everyone on their schedule. The games in September and October are just as important as those that happened yesterday. Don't get blasted by 20 by LSU and we're having a more interesting conversation about whether or not the 'Dawgs deserve a rematch with the Tide. But with that result, it's just too much to overcome.