The Week In Football: Alabama Destroys Tennessee, Michigan Ascends, And Ohio State Loses By Almost 30 On The Road 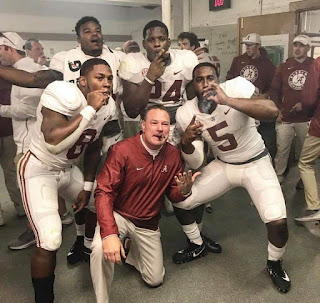 For the 12th straight year, Alabama won the Third Saturday In October. I can barely even remember what it feels like to beat the Crimson Tide. Holy crap. Let’s just start there….
Alabama wore out Tennessee again and scored the most points in the history of the rivalry
This game was over in the first five minutes when Alabama drove the field, scored a TD, rocked Vol QB Jarrett Guarantano, forced him to fumble, and then scored again. The only worse sequence was the start of the second half, when Tennessee’s Ty Chandler signaled for a fair catch on the kickoff at the 2 yard line AFTER he caught the ball, followed immediately by Vol QB Keller Chryst tripping over an offensive lineman and falling into the end zone for a safety, which was made worse when running back Jeremy Banks picked up a 15 yard unsportsmanlike conduct penalty. If you wanted to explain this game to someone, you’d just show them those two sequences, as well as Guarantano getting clocked in the chest so hard that he had to leave the game in the first half.
I’m not going to freak out over this game, one that Tennessee didn’t have a chance in hell of winning, but there also wasn’t really anything positive to take away either. I like that Jeremy Pruitt continues to be aggressive, but it’s incredible to me that the Vols have executed a surprise onside kick to almost near perfection three times this season and still haven’t been able to come up with the ball a single time. What’s even more amazing is that the offensive line has been unable to block consistently for the last decade-plus. They’ve had multiple NFL draft picks and All SEC performers and they’ve still been mostly an abomination. I get it; every once in a while a team is going to have issues with protection. Sometimes you have injuries, sometimes you lose a ton of guys to graduation/NFL, but eventually you figure things out up front. No program, particularly one like Tennessee, with the resources it has, should have this much trouble finding a five man unit that can hold blocks long enough to be able to consistently create offense. Of course, no program with the resources of Tennessee should be this atrocious for over a decade. Holy hell. This is why I drink.
Alabama was incredible, of course. Their defense played probably the best game they have all season, and if they can get by LSU in Tiger Stadium in two weeks (and I think they will), then I don’t see any team being able to play them within two touchdowns unless Tua gets hurt. 2018 Alabama is like the super team you’d create on Madden, only you’d play the entire schedule on Rookie Mode and just murder everyone. And Tua is like what would happen if a video game became real life. He and Nick Saban are just running through these SEC programs every week like they’re the American troops at Custer’s Last Stand.
I guess it’s… onto South Carolina? What a stinker on Saturday. Geez. The Vols aren’t close.
Which brings me to this: when the hell is Tennessee going to beat Alabama again? It won’t be next year; the game is in Tuscaloosa and Tua will still be the quarterback. How about 2020? Maybe? Tua could’ve gone pro by then, but it’s not like Alabama has been a push over without a great QB. 2021? Again, that game will be in Tuscaloosa. If Pruitt works out, 2022 will be his fifth year. Do we really have to wait that long? Holy hell.
Speaking of things that suck…..
Butch Jones got a Gatorade bath 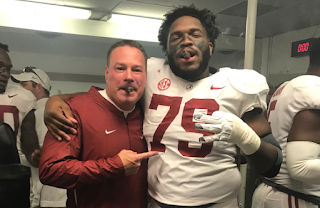 Butch has been an intern on the Alabama staff this year and got doused with Gatorade after the game. He also smoked victory cigars in the locker room. What a chump. You really know your career has gone up in flames when a team you recruited a majority of the players for gets blown out by more than 30 and you celebrate like you won the national title. What an absolute indictment of your coaching career. This goes down as the undisputed dumbest coach moment of the week, dumber than LSU’s strength coach intentionally slamming his head into players helmets.