The Hobnail Boot Across Their Nose 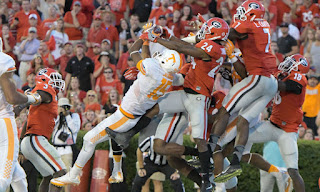 
We were due one like this, weren’t we? After all the heartbreak, all the bad luck, and the Dooley years, the football gods owed us one. I’m happy they finally cashed in on that debt.
Posted by Matt Peace at 8:48 PM