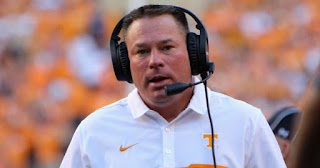 
Despite all the negativity the last two weeks, the Vols still have an excellent shot to win out and find themselves in Atlanta, where they’ll more than likely face ‘Bama again, this time with what is hopefully a fully intact roster. An SEC Title Game appearance will give Butch the longest leash a Tennessee coach has enjoyed since Philip Fulmer after the ’98 season. For better or worse, we’re married to him. I'll being praying to Thor himself that he's the guy I tricked myself into thinking he was three weeks ago.
Posted by Matt Peace at 7:04 PM