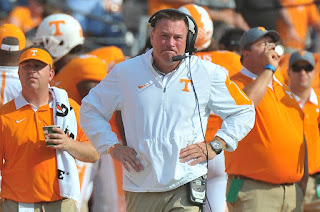 
So what does Tennessee do? Fire him? That would probably be inappropriate now, considering the program has gotten incrementally better during his tenure, even if they’ve underachieved and he’s been directly responsible for more mistakes than a bunch of lightweight drunk sorority sisters playing Operation. Unfortunately, the Butch years are starting to look like a less successful iteration of the Mark Richt Georgia years. You know, underachieving season after season after season, and low fan base optimism from years of having your hopes and dreams dashed and destroyed by the team caving under the pressure of big moments and games. Every UGA fan was tired of Richt by the end, and he actually won a lot of games! Butch hasn’t yet, and based on everything we’ve seen, doesn’t appear like he’ll ever be able to.
He's taken Tennessee from Point A (the Dooley years) to Point B (fringe SEC contenders). I'm not convinced, and we certainly haven't seen it anything yet, that would tell me he's the guy to take them from Point B to Point C (serious SEC and National Title contenders every single year). That's what he was hired for, and that's what Tennessee fans should expect from their football coach. Anything less than that and we're just Kansas football, a program that loses their freaking minds if they win 9 games.
Posted by Matt Peace at 10:31 AM