The Warriors Have No Killer Instinct And It Doesn't Even Matter 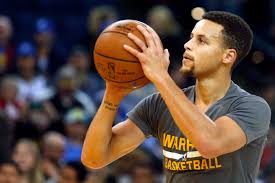 Somehow, inexplicably, the Golden State Warriors are tied 2-2 with the Houston Rockets. After tonight’s marvelous third quarter, one that saw Steph Curry make five threes and start dancing, they entered the final quarter with a 10 point lead and a chance to take a 3-1 lead and put the series in a stranglehold. Instead of burying Houston, they were held to 12 points, settled for some of the worst shots imaginable, and let the Rockets come all the way back and win 95-92.
This Houston team has been trashed the entire playoffs for not being tough enough, for playing too much one-on-one ball, and for James Harden’s and Chris Paul’s lack of success in clutch moments. They, at least for a night, silenced their critics with a marvelous fourth quarter in a must-win game., Paul, who is really at like 75%, was the real standout, and his relentlessness kept them alive.
But this really isn’t about the Rockets. Sure, Houston was great when they needed to be, but I don’t think anyone leaves this game thinking about them. Golden State’s poor performance when they had the chance to basically end the series is absolutely inexcusable for a team that has two of the three or four best players in the league. Curry vanished in the 4th quarter, only surfacing from time to time when he chucked a dumb three. Kevin Durant was similarly disappointing, as was Klay Thompson. This team should be blowing everyone off the court like they did last season, but instead, they’re letting inferior teams hang around/beat them in the most inexcusable ways.
Not breaking new ground here, but G-State has no killer instinct. Who is the guy on the team that goes down shooting? The guy that takes over the game physically, and curb stomps his opponents? Who doesn’t let the opposition up for air? Curry can’t really dominate a game unless he’s knocking in threes, and Thompson doesn’t have the ball in his hands enough to really take over unless his teammates are finding him AND he’s extremely hot. Draymond is a loose cannon, and can’t really create his own shot. Durant is the most consistent guy they have, but he’s extremely passive at times, and no one has ever thought, “Wow, Kevin Durant is really competitive. That guy would rather get stabbed to death than lose”. I think he erased his, “I’m a killer” potential forever when he decided to join the Warriors in the first place.
This team was hungrier last season. They were coming off the loss in the Finals to Cleveland, and they added Durant who had never won a title before. This season? Meh. It’s been a jog since October. They have the potential every night to win by double digits against whatever competition, and no one in the league has a realistic answer to what they do. But they don’t because there isn’t the will on that team to destroy people. They kicked Houston’s ass in Game 3, only to allow themselves to be pushed around and out-hustled tonight.
The truth is, Harden really didn’t do much for Houston tonight in the second half, and they still were able to come back. If anything, G-State’s lack of edge has tricked everyone into thinking they can be beat in a series. The reality is, unless Durant breaks his leg in nine places, they’re going to win the title, even if they have to slog their way to it. As poor as they were tonight, I wouldn’t be shocked at all if they won the next two games in this series. And then when they’re in the Finals, neither Boston or Cleveland will have the horses to hang with them.
This could be an all-time legendary team. Instead, they’ll become another example of a could’ve-been-greater squad that won the title despite the fact that they played the entire playoffs in a malaise. Thus, we now have biggest problem facing the NBA. Sure, the league has had dominant teams before, but none have ever been like this Warriors team, who literally just doesn't try hard or fight enough when they lose. Magic's Lakers were great, but they had to compete with Bird's Celtics the entire '80s. Jordan's Bulls dominated the '90s, but they were at least challenged a few times. Same with Shaq's Lakers, who faced two Game 7s in the Conference Finals in 2000 and 2002. LeBron's Heat were pushed multiple do-or-die games, Duncan's Spurs never repeated as champions, and even Russell's Celtics played 10 Game 7s. This Warrior team might be pushed, but it's because of their own screw-ups or lack of interest, not because what anyone else does against them. Their lack of dominance makes them frustrating, not interesting, and since we already know that no one actually has a realistic shot to beat them, it makes the league and the playoffs less compelling.