On-Field Results Are What Will Tell Jeremy Pruitt's Story On Rocky Top, Not His Words 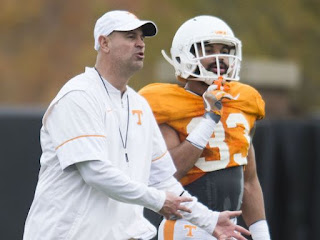 When Tennessee brought to a close it’s embarrassing head coaching search last fall by hiring Alabama defensive coordinator Jeremy Pruitt, Vol fans loved it. “Hell yeah, this guy worked for Saban! He’s a hard-nosed guy! He really coaches them hard!”
And when he criticized the fanbase for their poor showing at the spring game a few weeks ago by saying this, “The ones that were here, I’m proud they were here. They’re fired up. They’re ready to get going. And then there was some that wasn’t here that had legitimate reasons. They couldn’t be here. Then there were some people that wasn’t here that, why wasn’t they here?” the reaction was the same. “Pruitt tells it like it is! He’s not afraid to call out any and everyone!”
I don’t know why we as Tennessee fans, after the Butch Jones tenure, allow ourselves to be seduced by coach speak, no matter how it sounds, from our head coach. Or why anyone would care that former Alabama quarterback John Parker Wilson, who played for Pruitt at Hoover High School, declared this week that Pruitt scares him more at Tennessee than Kirby Smart does at Georgia. Great! Thank you! What are you basing this on? The fact that Pruitt is utterly unproven, at this point, as a head coach, while Smart has already won an SEC Championship, and was extremely close to winning a national championship in only his second year?
The fact is, everything that is said right now, from Pruitt himself, or about him by others, is totally and utterly pointless. Again, WE’VE SEEN THIS BEFORE!!! THIS WAS THE ENTIRE BUTCH JONES TENURE!!!  Butch’s “brick by brick”, “champions of life”, and “five start hearts” might as well be Pruitt’s “the fanbase needs to be better”, “Aight”, and his misuse or misunderstanding of wasn’t/weren’t.

Pruitt is going to have 12 opportunities, or if they win enough, 13, to prove himself on the field this fall. And what’s said right now has zero impact on how those 12 or 13 games will play out.
The fanbase is starved for a winner. It’s been over a decade since their last 10 win season or SEC Championship game appearance, and over twenty years since their last SEC Title and National Championship. This has been an extended period of wandering in the wilderness, a stretch dominated by poor coach hires, flagrant mismanagement in the athletic department, and about 500 different gut punch losses. Think about this: Pig Howard fumbled out of the side of the end zone in overtime to lose a game against Georgia in 2013, and as fluky as that was, it wasn’t even one of the worst 10 Tennessee losses over the last decade.

If there’s one thing Butch did well in Knoxville, it was increasing the amount of talent on the roster. Pruitt is inheriting a significantly fuller cupboard than the one Butch stepped into back in December of 2012. There was the talent on the 2017 Vols to go at least 8-4, but the season went into a tailspin after how atrocious they were in what was an extremely winnable Florida game. It was like everyone gave up on the season after they crapped away a million different chances to win the game, and then lost on a Hail Mary.
A bowl game appearance in Year 1 for Pruitt should be an expectation, not just a hope. And then the Vols should compete for the SEC East in 2019. If Pruitt is going to be a roaring success in Knoxville, he should be able to get this thing turned around relatively quickly.
Never forget this fact: since the implementation of the SEC Championship Game in 1992, every coach that has won the conference had at least 9 victories at said school by his second year. Meaning that if a coach is going to be successful at his school, he wins at a high level early. There are no three or four year rebuilding jobs for great coaches. We’ll know what we have in Pruitt by the end of 2019. And if it’s back-to-back 6-6 campaigns, it may be time for another coaching search.