The NBA Finals Are Already Over 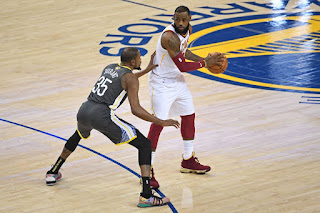 For the second year in a row, the Warriors are blowing Cleveland off the floor. This series is over, and frankly, it was over on Thursday night in Game 1 when LeBron threw up a 51-8-8, one of the best games of his career, and the Cavs still lost. They hung around tonight for most of the first three quarters, until Steph Curry went bonkers in the 4th quarter and started making shots from the parking lot.

LeBron knows he can’t beat this team. That’s why he came out after Game 1 and talked about how it was one of the most devastating losses of his career. He played out of his mind, and then had the rug pulled out from under him by the changed block/charge call, George Hill’s missed free throw, J.R. Smith’s boneheaded blunder, and their overall poor team effort in the overtime. They squandered a very winnable Game 1, and it completely changed what the series could’ve been. It reminded me of Game 1 of the ’95 Finals, when Orlando’s Nick Anderson went to the free throw line with under 15 seconds to play and Magic up by three. He missed both foul shots, but got the offensive rebound and was fouled again. He then, incredibly, missed both of those foul shots. Houston got the rebound, Kenny Smith hit a three to send it to overtime, a game the Rockets eventually won. Orlando was cooked after that, and despite some impressive Shaq games, they ended up getting swept. Cleveland’s loss on Thursday wasn’t quite that heartbreaking, but there was a feeling that this loss could linger and end up hovering above the whole series.
In terms of adjustments, as incredible as this sounds, Cleveland is going to need more from LeBron scoring-wise. Great, he almost had a triple double tonight. So what? They lost by 19 and got their doors blown off in the 4th quarter. LeBron had 13 assists tonight, but that's not all that impressive when you consider that he didn’t come off the floor until late in the 4th quarter (when the game was already decided), coupled with the fact that he literally decides every possession for his team. He either takes the shot, or passes to the guy who shoots. Some of those shots are going to eventually fall, and thus, the assist numbers. He's like Russell Westbrook in that respect. Does anyone think Westbrook is a phenomenal passer? No, they recognize that he literally has his hands on the ball all the time, and decides everything. Cleveland really needs LeBron looking for his own offense, putting his head down, and getting to the rim every single possession. With the Warriors missing Andre Iguodala, their best perimeter defender, LeBron should be able to get by everyone on the Golden State roster whenever he wants. And once he beats his primary defender, it’s not like he has to worry about anyone substantial waiting at the rim for him. Yes, this includes Javale McGee, who before tonight hadn’t been heard from in a basketball context all season besides on “Shaqtin’ A Fool”. On a night when really only Kevin Love (22 points) had it going, tonight needed to be a night where LeBron looked around and  realized that he needed to try and get 40. And I’m not knocking him here too much; he’s clearly outgunned in this series, but this passive all-around game he played tonight isn’t going to cut it if they want to even win a one game. Of course, maybe LeBron didn't take over because he was too tired to do so. He looked gassed, particularly when he went to the bench during timeouts in the second half. He's been forced to pick up his defensive effort in this series, because he'd become a complete defensive liability if he didn't, but add in the fact that he's playing almost every minute, and carrying such a heavy load on the offensive end, 29 points might be all he's able to muster on a nightly basis.
Regardless, this backs up what I wrote during the last Rockets-Warriors series about Golden State, which is that we all like to talk ourselves into these NBA series involving them being in doubt because we want competitive basketball. Once Chris Paul got hurt, Houston was finished. And as soon as Cleveland advanced to the Finals, winning more than one game against this Golden State team would’ve been a miracle. Great teams aren’t a problem in the NBA; what can’t work is when every single series is over before they even start.