The "Curse" Of Fulmer? 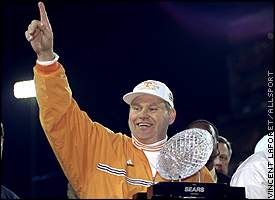 I’m not a big believer in conspiracy theories or curses. I don’t think alien encounters are real (and neither is Bigfoot or the Loch Ness Monster), I laugh at people who say 9/11 was an inside job, and I don’t think the Red Sox went eighty-six years between World Series wins because their cheap owner sold Babe Ruth to the Yankees, causing them to be "cursed". I think these things develop from not-easily-explainable circumstances, or a desire within people to make the world around them more interesting or mysterious than it actually is.

Let’s take the Red Sox for example. Sure, you can turn you brain off and shout “Curse of the Bambino!” until your lungs bleed, but the bottom line is that for most of the 1900s, the Sox were a poorly run franchise whose glaring flaws showed up at the worst possible moment. Take Game 6 of the ’86 World Series for example. Everybody remembers Bill Buckner letting the ball roll through his legs, but they seem to forget that Boston was one strike away from vanquishing all their demons and finally bringing the title back to Beantown, before things went sour because the bullpen, which had been terrible and had tortured the fan base all year (the team blew 14 saves during the regular season, and no pitcher with more than 25 relief appearances had an ERA lower than 3.92) imploded at the worst possible time. So was it totally shocking that the relievers cost the Sox the title? It was absolutely devastating, but if any group was going to lose it for them, it would’ve had to be their back end.

Now just because I think curses are absolute crap doesn’t mean I think they don’t carry any weight in the minds of the fans, the media, and worst of all, the players. The Cubs, another “cursed” franchise, blew a 9 ½ game lead to the Mets in the month of September during the 1969 season. And not only did they lose the division, they choked away the year so badly that they ended up losing the division to by 8 games, meaning there was a 17 ½ game swing in one month. ONE MONTH! Supposedly, things starting turning south after a black cat (an omen of bad luck) walked behind team captain Ron Santo while he was in the on-deck circle in Shea Stadium. Yeah, because that’s completely reasonable…. Here’s what actually happened: the Cubs had a tough stretch early in the month, the Mets started surging, and the fan base started flipping out because of the “curse”, causing unnecessary stress and angst in the clubhouse, which led to poor play day after day after day. The Mets caught on fire and played their best baseball of the season. got tight and choked. They bought into the whole “curse” narrative, and they let it distract them, consume them, and eventually, destroy them. They let the “here we go again” and “Lovable Losers” mindset take hold of them and creep into the clubhouse, snowballing until it broke them.

I think the same thing has happened at . Granted, it hasn’t been more than a generation since they won a big game, claimed the conference title, or been crowned national champions, but the way they’ve lost these games is unfathomable. I can’t remember another college football blowing this many winnable games in such a short amount of time. A lot of people have talked about the program being "cursed" since they fired Fulmer back in '08 because they got rid of the guy that brought a national title to Vol Country, but that's literally insane, particularly if you just speak those words out loud to yourself. Plus, it's not like Fulmer never lost any tough, gut wrenching games (Jabar Gaffney anyone?). However, it's pretty difficult to ignore that the losses since he was relieved of his duties have been much more consistent and soul crushing. Here’s a list (if you have a particularly weak stomach, don't watch these videos. Or just stop reading in general. Because vomiting was the only thing on my mind when I went back and rehashed this):

That’s seventeen losses in less than six seasons, measuring anywhere from “haunting” to “I don’t think I ever want to watch sports again”. How has this happened? Is just the most unlucky team in the history of sports?

I don’t have all the answers. I really don’t. I have a few theories, but nothing provable beyond a reasonable doubt. A lot of it has to do with a lack of talent, lack of experience, and the ineptitude and poor late game decision making by both Derek Dooley and Butch Jones. I also think the whole Chicago Cubs, “Oh god, we’re going to screw this up…. Again” mindset has taken hold more than a few times on the sideline, and I think you can feel it in the stadium during Vol home games. There’s a nervous energy, an expectation of mediocrity and disappointment, and despite the occasional win, like the one over two weeks ago, the program hasn’t quite been able to shake it. And I don’t know if they’ll be able to do it for a long time. Once that stigma becomes engrained in a program or organization, it’s really difficult to eradicate it. Just ask the Red Sox, who needed a miracle, down 3-0 to the Yankees comeback in the 2004 ALCS to break the “curse”. Or ask the Cubs, who are embedded in over 100 years of this stink.

How do you avoid the snowball effect? I have no idea. And I don’t think does either. At least not yet.
Posted by Matt Peace at 8:17 PM