The Vols Break Muschamp's Streak Thanks To Their Seniors 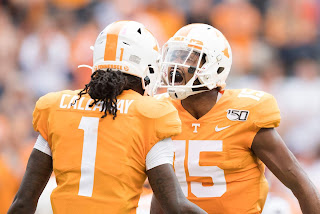 Well, that was unexpected! Not the Vol victory of course, but more so just how dominant they were, particularly in the second half where they held the Gamecocks scoreless in what was the best defensive performance from this program in years.
The sense of dread that I’ve felt a million times watching Tennessee was there from the opening play of the game when South Carolina went 75 yards for a TD. “Holy crap” I thought. “Not again. This is how its going to be today? They're going to lose to Will 'Beer Gut' Muschamp again? Again???” But then the Vols rallied, thanks in large part to their seniors, specifically Jauan Jennings, Marquez Callaway, Daniel Bituli, and Darrell Taylor. Hell, even the quarterbacks played well!
I’ve given Jennings crap for his bad drops and some of the things he’s done this season after he declared himself “team leader” before the BYU game, but that guy has been the most consistent offensive player on the roster, and oftentimes the only receiver that's been able to get open. He's showed up to play every week and has completely bought into Jeremy Pruitt's message. Strange journey for a guy who was literally kicked off the team only two years ago. He had 7 catches, 174 yards, two touchdowns (including one where he got annihilated and still held onto the ball), and even made some good plays out of the wildcat. Probably his best game as a Vol.
I mentioned on Friday about how disappointing Marquez Callaway had been throughout his career, based on how spectacularly it had began against Georgia Tech back in 2017. So of course he would run a punt back for a touchdown and catch another for a 55 yard score today. I expected we’d be seeing a ton of these from Callaway in his career; at least he’s producing them now.
Bituli was incredible as well. That guy has been a tackling machine ever since he strapped his helmet on in Knoxville, and his 15 takedowns tonight, in addition to his blocked punt and recovery in the end zone for a touchdown, should earn him SEC Defensive Player of the Week honors.
Taylor had a bad personal foul against Alabama last week, but he whipped all the tackles on South Carolina tonight on his way to two sacks and a key pass deflection on a Gamecock 4th down try. Unfortunately, he limped off the field in the fourth quarter, and to this point, there is no update on his status. Hopefully he’ll be back sometime this season, at the very least for their three remaining conference games.
Let’s give the quarterbacks, specifically Jarrett Guarantano, some credit too. JG was probably the most hated Vol by the fanbase that I can remember, but he was really good tonight. His 11 completions went for 229 yards, and his second TD pass to Jennings made it to him because he was willing to stand in there and get clobbered by a Gamecock rusher. Unfortunately that hit ended his night, but JT Shrout was impressive too and found Callaway on the next possession for that 55 yard bomb.
The fact that Guarantano was able to play as well as he did, despite rumors that he'd be booed the second he took the field, just goes to show how mentally tough that guy is. We already knew he had it physically; otherwise he wouldn't have been able to stand behind that wet paper bag line for the last few years. But tonight was really great for him.
Speaking of the offensive line, they played probably their best game all season as a unit tonight. The fact that Tennessee was able to throw the ball down the field is based in large part on the ability of that much maligned O-Line to be able to hold blocks for longer than a half a second.
This has been a completely different team since the bye week; there’s been a visible fire and intensity from them this month that they didn't have before. Guys are flying around on defense, their jawing with the opposition, and they no longer look confused about their assignments. Tonight’s offense was the first time they actually looked like what we thought this team would be when they hired Jim Chaney before the year. I’ve been pretty critical of Jeremy Pruitt for a lot of things this season, but you have to give him a lot of credit for what he’s been able to do with this team after their disastrous start to the season. If anything, the team seems to have bought in more as the season has gone on, and that’s a testament to the job that Pruitt has done.
It’s really nice to have the Muschamp monkey off this program’s back. The fact that he and his Natty Light gut were 7-0 against the Vols was the most embarrassing thing about Tennessee, other than that they’ve lost to Alabama 13 straight times. Hopefully they’ll find a way to kill that monkey too. The sooner, the better.
There’s still a long way to go for this program to get back to where we all want it to be, but tonight was another “brick” in getting this thing turned around. Ultimately Pruitt’s fate will be decided on how he does against the teams Vol fans really want to beat; Florida, Georgia, and Alabama. But for now, he can breathe a bit easier knowing he’s a step closer to bowl eligibility, which would be a nice surprise for anyone who was rooting for this team after the 0-2 start.